Journal of Arab and Muslim Service

Predicting compulsive buying is important and it is said to account for several billions of dollars in annual sales. Recently, general phenomenological studies have indicated that new computer-aided diagnostic (CAD) techniques offer stronger predictive precision than the classic one. The main objectives of this paper were to characterize compulsive consumers and determine the most efficient predictive computer-aided diagnostic technique. Five CAD techniques were tested and compared them with the traditional logistic regression to predict whether an individual classifies as compulsive buyer or non-compulsive. The results show that the support vector machine (SVM) and the K-nearest neighbour (KNN) not only deliver better predictions than the logistic regression technique but also outperform the multilayer perceptrons neural network and the radial basis function. The additional insights from the models allow us to conclude that the most important variables to classify consumers as compulsive are their proneness to sales, prestige-sensitive, and price-quality inference. The measures concentrated on price-related factors because consumers are exposed daily to promotions and offers. This research applies various machine learning techniques in the prediction of compulsive buying behaviour. The variables are price-related mainly because they have been less studied, and consumers often justify their compulsiveness on these variables. Keywords: Compulsive buying; computer-aided diagnostic (CAD) techniques; retail; consumer behaviour.

Abstract Young people in Afghanistan use Social Media for a variety of purposes that reflect the nation’s complex social, political, technological, and cultural realities. This study explored their use of Social Media (SM) and attitudes, especially in terms of political, social and cultural aspirations. Urban and relatively affluent youths have much greater access to SM, although smart-phone access increases access. Facebook in English and Dari dominates SM use; news services and political applications facilitate online discussion. Young people across the social spectrum answered printed questionnaires to learn their usage and attitudes. Responses showed both social and political uses, otherwise difficult in this highly-structured and constrained society. Family factors shape much SM use, mostly reflecting local social norms, and many parents approve of its access to the wider world. The range of applications roughly mirrors that in other nations, with an emphasis on personal expression. Gender is a key factor, with females focusing on fashion and entertainment and males on humor and politics; however, SM might be the society’s most gender-neutral form of communication. “Fun” is the major focus of SM activity, with some romantic usage. Almost all respondents depend on SM for political news, including some protest and gossip. SM allows uniquely free connections with others across the country, though information security is a major concern. Young Afghans depend to an unusual extent on Social Media to circumvent restrictions, with substantial emerging significance on both social and political processes. Key words: Afghanistan; Social Media; politics; social connections; culture; society; Facebook.

Abstract The recent economic changes that have emerged from the government’s newly developed plan known as ‘Vision 2030’ in Saudi Arabia are intended to provide for an unprecedented transformation of the Saudi tourism sector. This includes such changes as the electronic tourist visas introduced in 2019 and upgrading The Saudi Commission for Tourism and National Heritage to the Ministry of Tourism in 2020. Within this context, cooperation between local companies is important so that the local tourism value chain can develop in a more balanced way. Despite the fact that collaborative and cooperative relationships between companies depend on accommodating the institutional environment so that development is encouraged, the way this is to be managed in Saudi Arabia is quite puzzling. This paper aims to analyze, for the first time in Saudi history, the perception of this process from the perspective of local tour operators based in Jeddah, the second most important city across the Kingdom. The Delphi qualitative research method and a Focus Group technique was used to gather the required information. The results of this study suggest that there is a great deal of concern on the part of intermediaries about the institutional issues that affect the business environment development in Saudi Arabia, and their consequences for the economics of the tourism sector. And as a result, recommendations are made in order to minimize such impacts. Keywords: Tour operators; Cooperation; Tourism development; Delphi research; Focus Group, Saudi Arabia.

The Journal of Arab & Muslim Service, Tourism and Hospitality Research publishes a large variety of articles with regard to theories, methods of data collection, and types of data analysis. JAMSTHR accepts qualitative and quantitative articles focused on themes pertinent to the understanding of phenomena related to Service, Tourism, Hospitality and related fields in the Arab and Muslim world and about Arab and Muslim consumers worldwide. The Journal also publishes case studies, literature reviews, and opinion pieces. The purpose of this new journal is to encourage researchers and academics to share their work and contribute to building a knowledge base focused on this market.

Thank you for choosing to submit your paper to JAMSTHR. These instructions will ensure we have everything required so your paper can move through peer review production and publication smoothly. Please take the time to read and follow them as closely as possible, as doing so will ensure your paper matches the journal’s requirements.

You can use this list to carry out a final check of your submission before you send it to the journal for review. Please check the relevant section in this Instructions for Authors for more details. Ensure that the following items are present:

Language (usage and editing services): Please write your text in good English (American or British usage is accepted, but not a mixture of these). Authors who feel their English language manuscript may require editing to eliminate possible grammatical or spelling errors and to conform to correct scientific English may wish to use the English Language Editing Service available at the journal (See JAMSTHR English Language Editing Service.)

A note from the editor

A note from the Editor

Whether I am teaching in the US, the Netherlands, France, or Kuwait, whether I am discussing topics in service management, tourism, hospitality, leisure, or recreation studies, I find myself facing the same problem: there is a striking gap of information and theories pertaining to the Arab/Muslim consumer. “Sir, this theory is based on Western consumers. Can you explain how and why the Arab/Muslim consumer behaves this way…?” “Professor, I am writing my thesis/dissertation about the relationship between organization citizenship behavior and employee engagement in hospitality in my country, but I can’t find information/data…” “My dear colleague, I have a few case studies which I have written with MBA students. They are important but not interesting enough to be published in a ranked journal. Reject, reject, and damn desk-reject! (...) They are now sitting on the shelves in my office feeding the dust. I am, however, certain that their impact factor could be considerable.”  I have no doubt that many of you will find such claims very familiar and disturbing. The idea of developing a journal focused on the Arab and Muslim consumers in our academic field has been festering in our minds for too many years. It’s about time to do something about it. We need to progress. We need to innovate. We need to equip our graduates with the knowledge and research skills to remain competitive, produce and prosper.

I am sending out a call to colleagues all over the world to participate with us in this timely project. 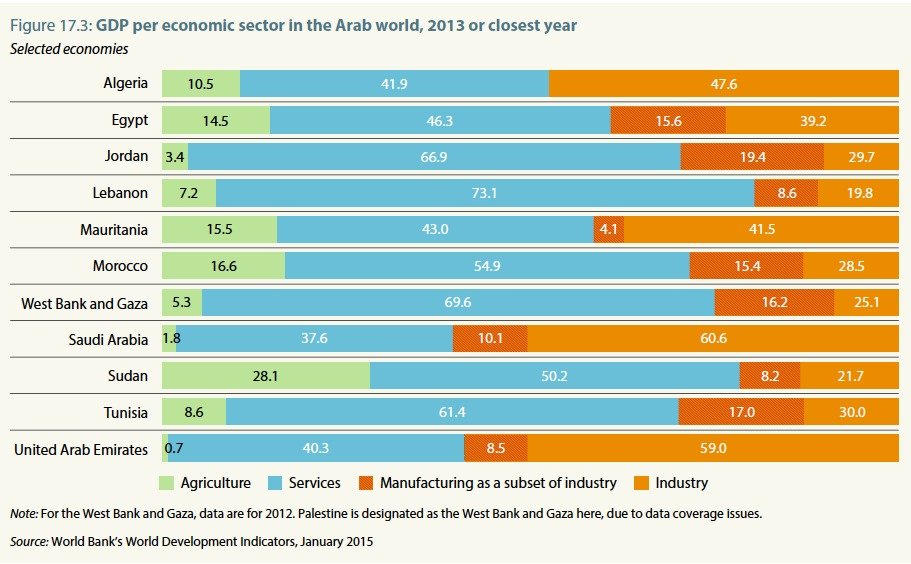 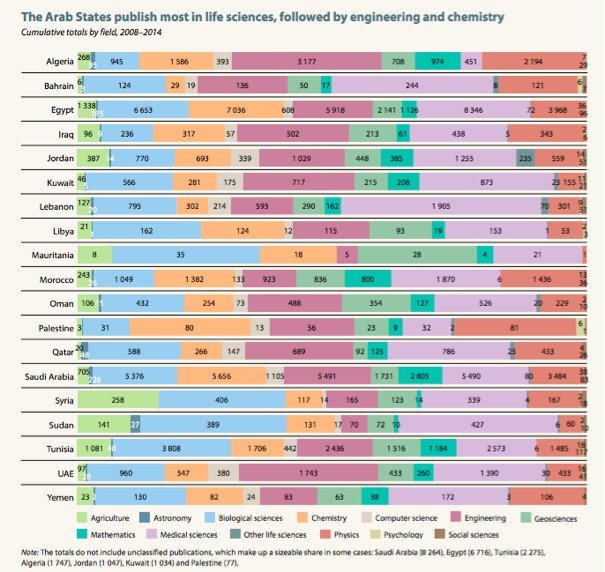 According to UNESCO It is noteworthy that the greatest number of scientific articles per million inhabitants in the Arab world in 2014 came from two oil-rent economies: Qatar and Saudi Arabia. Along with Algeria, Egypt and the United Arab Emirates, their output has grown faster than that of any other Arab country. Qatar and Saudi Arabia also have the region’s highest citation rates. This trend may be partly due to the leap in international co-authorship since 2005 in Qatar (from 59% to 92% of articles) and Saudi Arabia (from 42% to 80%), which was greater than the regional average: two-thirds (66%) of articles from the Arab region had international co-authors in 2014, compared to 44% in 2005. Both Qatar and Saudi Arabia have put incentive measures in place in recent years to attract foreign researchers to their universities. Also of note is that scientific output grew faster in the Arab world (+109.6%) between 2008 and 2014 than in any other part of the world, pushing up the region’s share of articles from 1.4% to 2.4% (UNESCO Science report: toward 2030). 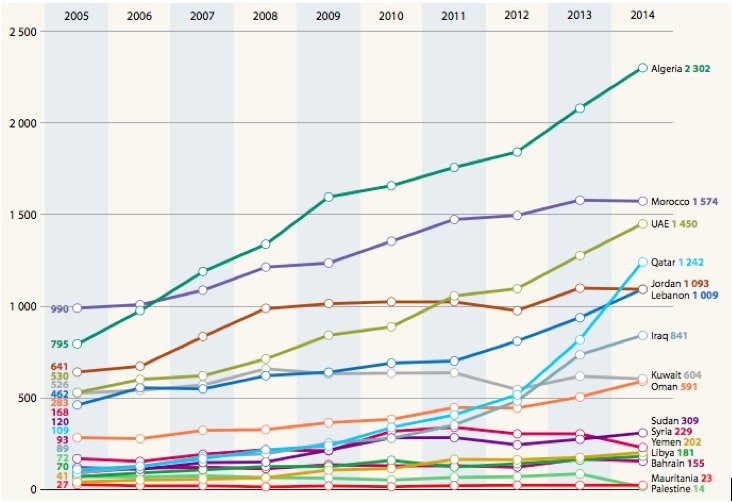 Despite the progress made, the region shies away from representation in knowledge development and the sharing of knowledge about the Arab and Muslim world. Teachers, academics, managers, and policymakers struggle to find statistics on which to base respective activities.  Longitudinal data are basically non-existent. Even descriptive statistics is a rare commodity. We need longitudinal data, we need descriptive statistics, we need a systematic inquiry to build knowledge. We have started, but we have yet to begin, to begin consolidating our knowledge in a systematic manner. Progress is based on a solid ground.

As we all know, the Arab world is composed of many countries and so is the Muslim world. There are Arab people who are not necessarily Muslim and Muslim people who are not Arab. For a long time, Western scholars have been ignoring the study of Arab/Muslim world and academic dialogue occurring in the context of Arab/Muslim cultural phenomena. This neglect affects the whole field of service studies. Westerners are still having stereotypical images of the Arab/Muslim world. Information about what, who, when, how, and why Arabs/Muslims do what they do when they do it is needed. Arab, Muslim and international academics, practitioners and students have long acknowledged this gap during academic and industry conferences. How do Arab/Muslim consume and behave is under-researched and remains speculative at best, despite the growing spending power of this market and its diversity. A quick scan of major service academic journals supports the paucity of existing articles on consumer behavior regarding Arab/Muslim consumers.

A call for concern

A call for theoretical, empirical/research-based and practice-oriented papers was sent to major tourism and hospitality academic networks. Nevertheless, despite the generic nature of the themes and the multiple attempts to encourage submissions, the response to the call remained small. Out of the few proposals received, we have been able to select only five papers. Our speculative reasons concerning the lack of submissions include: lack of interest in the topic by international academics, lack of funding for this type of research, a general lack of interest in tourism and hospitality research from domestic universities. Furthermore, the exploratory nature of the research, although needed, might be perceived to be too simplistic and thus is not easily accepted by mainstream academic journals. Another reason could be the desire of and pressure on academics to publish in high-ranked journals. In addition, non-English speaking academics encounter language difficulties to publish in English academic journals. Funding for proofreading and editing is not always accessible. Generally, Arab and Muslim countries "face a host of hurdles, including a lack of focus in research priorities and strategies, insufficient funding to meet research goals, little awareness of the importance of good scientific research, inadequate networking, limited collaborative efforts and brain drain. It is clear from available statistics that countries will need more sustained government support in future, if they are to strengthen university research, overcome weal university-industry linkages and give university graduates the professional and entrepreneurial skills to create viable national innovation systems (UNESCO Science report, p. 438).

There is a healthy need to encourage competition and cooperation among and between Arab/Muslim universities, academics and researchers/practitioners to produce knowledge about their respective countries. There is also a need for synergy among research institutions to produce impactful research. It is the hope of this journal to stimulate coopetition between and within Arab/Muslim countries to create knowledge, share and disseminate knowledge about who they are and what they do for a better understanding of their perceptions, attitudes, and behavior. Such information can be helpful also for a constructive, objective, and representative dialogue between East and West.